The History of the Incandescent Lightbulb 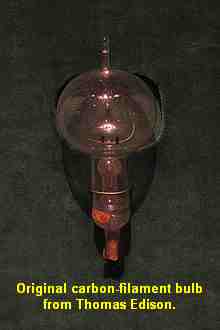 1809 - Humphry Davy, an English chemist, invented the first electric light. Davy connected two wires to a battery and attached a charcoal strip betwween the other ends of the wires. The charged carbon glowed making the first arc lamp.

1878 - Sir Joseph Wilson Swan (1828-1914), an English physicist, was the first person to invent a practical and longer-lasting electic lightbulb (13.5 hours). Swan used a carbon fiber filament derived from cotton.
1879 - Thomas Alva Edison invented a carbon filament that burned for forty hours. Edison placed his filament in an oxygenless bulb. (Edison evolved his designs for the lightbulb based on the 1875 patent he purchased from inventors, Henry Woodward and Matthew Evans.)
1880 - Edison continued to improved his lightbulb until it could last for over 1200 hours using a bamboo-derived filament.
1903 - Willis Whitnew invented a filament that would not make the inside of a lightbulb turn dark. It was a metal-coated carbon filament (a predecessor to the tungsten filament).
1906 - The General Electric Company were the first to patent a method of making tungsten filaments for use in incandesent lightbulbs. The filaments were costly.
1910 - William David Coolidge (1873-1975) invented an improved method of makingtungsten filaments. The tungsten filament outlasted all other types of filaments and Coolidge made the costs practical.
1925 - The first frosted lightbulbs were produced.
1991 - Philips invented a lightbulb that lasts 60,000 hours. The bulb uses magnetic induction.

The Edison screw fitting is a system of screw mounts used for light bulbs, developed by Thomas Edison and licensed starting in 1909 under the Mazda trademark. The bulb has a threaded metal base which screws into a matching socket. Most have a right-hand threading that tightens when the lamp is turned clockwise. Some lamps and fittings have a left-hand thread to deter theft, since they cannot be used in other light fixtures. The Edison screw base became popular and eventually displaced competing standards for lamp bases for general lighting purposes in several places, especially in North America and continental Europe. In Britain and countries with a historical connection to Britain 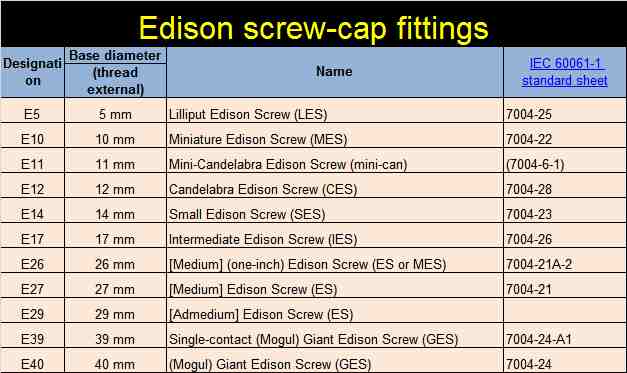